Oh how cocky we all were one year ago today. Richard Sherman cocky. Cher cocky. Oh hell we were Prince cocky.

To add insult to shitshow, it really felt like we had to deal with this anniversary twice — on election day yesterday and today, the actual anniversary of that fucker of a day. I had a little PTSD yesterday when I went to vote. Then I cautiously texted a few political junkies, creeping toward the acknowledgement. Had no intention on turning CNN. But then the polls closed in Virginia and I gave Jake Tapper the side eye just out of curiousity. It went uphill from there. 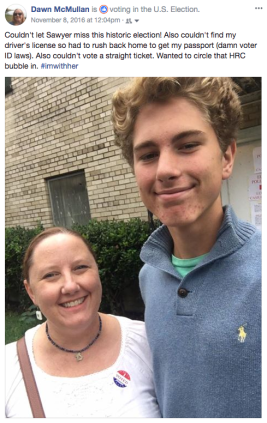 And here we are, one year later.

In that year, I’ve worn my HRC T-shirt likely an inappropriate number of days. I’ve spent much less time with my Trump-loving Dad than I should have (my mom died three months before the election). I’ve started a feminist book club. I’ve met more local candidates than I did the first 49 years of my life combined. I’ve been to at least one political meeting a month, often more. I’ve stayed home and watched “Veep” with a bottle of wine when I just couldn’t. I’ve taken up a Twitter habit that may be affecting my mental health. I walked in the Women’s March in Austin. I still slightly jump at the regular “what fresh hell is this” news alerts about this administration. I have forgiven Nate Silver. I’ve said shitshow 1.187 million times. I have donated to candidates I can vote for in 2018 — and those I can’t. I survive some days because of a text group with three friends called “Love & Resistance” that talks about the latter probably 80% of the time. I’ve shaken the hand of Van Jones.

And I started this blog. Not bad, considering I spent the two days post-election crying on the couch with pie.

I had no idea what I’d do today. Then a call from one of my favorite local candidates — Colin Allred, who is going to replace U.S. Rep Pete Sessions in 2018 — spurred me into action. I’m honoring this one-year anniversary of the 2016 election by donating to some of my favorite progressive candidates. Support headed your way Colin, along with Beto O’Rourke, Brandy K Chambers for Texas House Representative District 112, Kendall Scudder for Texas Senate, and Jana Lynne Sanchez for US Congress. Some of these people I can actually vote for, some I can’t. But they all end up representing me in some way so I’m all in. (Want to really make a difference in the campaigns of your favorite candidates? Set up a recurring donation to help get them through to the 2018 election in one year.)

Tonight, I am going to eat some pie. But with a plate and at the kitchen table this time. Because while I may not be Prince cocky yet, I’m definitely Angela Merkel cocky. And that’ll more than do on this day.

So Happy anniversary Resistance! We didn’t ask for this job, but we are most definitely kicking ass at it.