I’ve been pondering this post for at least a month, since I started reading Hillary Clinton’s “What Happened.” Yesterday, I boarded a flight from La Guardia to Dallas with Donald Trump Jr. on board — a flight I boarded carrying said book. So it seems fate is forcing my hand. 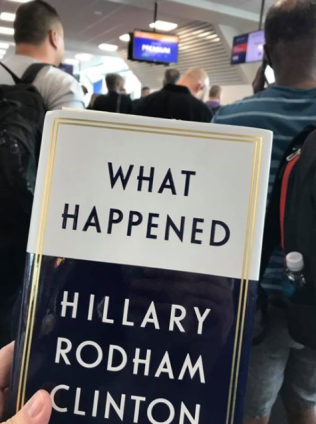 I so passionately started this blog in the days after Trump Sr.’s election. It kept me off the booze and couch (mostly) for months. I lost my mojo this summer though, for a variety of reasons.

I feel the battle resolve rising again, helped along, I’m sure, by HRC’s book. I’m just off — and hopefully on the right track after — an incredibly stressful six weeks with my kids. I’ve spent the last few days with my sister-from-another-mother and her amazing wife, watching fall arrive in upstate New York, drinking apple cider, and sleeping more soundly than I thought I was still capable of.

Before I boarded my flight, I grabbed a green smoothie. I made a gym date with myself on my calendar. I pulled “What Happened” out of my suitcase in case it got gate-checked (it did) and was about to board the plane when Trump Jr. was spotted.

“Can we take another plane?” the guy next to me said.

I gripped my book. I texted my husband and some friends. I took a little video as I boarded. Yep. That’s him. 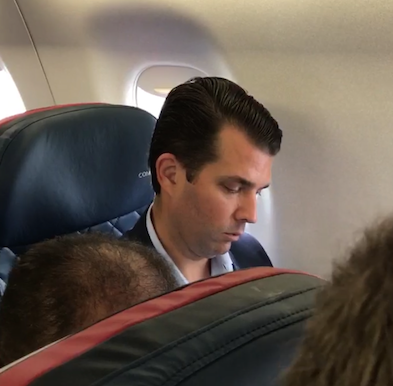 The novelty wore off as I sat in the back of the plane, Trump Jr. (who apparently is in town for this speech — which press must pay $5,000 to attend??) in the front, in “comfort” class but not first. I was surprisingly angry to be sharing canned oxygen with this man. It was a small plane with 72 passengers. He walked by me to pee. I’m sure the eye contact we had (twice) isn’t unusual for him. Surely he meets many stern stares as he travels around, backing up his father’s lies.

The anger is once again coming to the surface. And it needs to. Productive anger … not tweeting/texting/bitching anger. I’ve taken several productive steps recently, which I’ll share here in the coming weeks.

Here is a synopsis of Trump Jr.’s speech today. Trump Sr. is also headed to Dallas this week. I’ve heard rumors of protests, so I’m staying tuned. It’s all just too close for comfort. A friend asked recently when our “bridge moment” would come — and how we would react. One year ago, I couldn’t have imagined we’d need one.

This man on my plane and his family require we be ready. Drink your green smoothies. Hit that treadmill. We need to be strong. Do something about this shitshow instead of just talking about it. Or if you can’t — like I couldn’t for the past several months — I’ll do it for you until you can. We have to stand together in this marathon. Who was it who said we were stronger together? 😊

5 thoughts on “Week 40: So Donald Trump Jr. was on my plane yesterday”